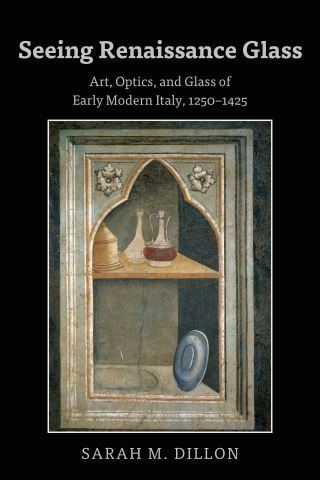 With the invention of eyeglasses around 1280 near Pisa, the mundane medium of glass transformed early modern optical technology and visuality. It also significantly influenced contemporaneous art, religion, and science. References to glass are found throughout the Bible and in medieval hagiography and poetry. For instance, glass is mentioned in descriptions of Heavenly Jerusalem, the Beatific Vision, and the Incarnation. At the same time, a well-known Islamic scientific treatise, which likened a portion of the eye’s anatomy to glass, entered the scientific circles of the Latin West. Amidst this complex web of glass-related phenomena early modern Italian artists used glass in some of their most important artworks but, until now, no study has offered a comprehensive consideration of the important role glass played in shaping the art of the Italian Renaissance.

explores how artists such as Giotto, Duccio, Nicola Pisano, Simone Martini, and others employed the medium of glass—whether it be depictions of glass or actual glass in the form of stained glass, gilded glass, and transparent glass—to resonate with the period’s complex visuality and achieve their artistic goals.

Such an interdisciplinary approach to the visual culture of early modern Italy is particularly well-suited to an introductory humanities course as well as classes on media studies and late medieval and early Renaissance art history. It is also ideal for a general reader interested in art history or issues of materiality.